Less than a week after the Raiders released Arden Key, the young defensive end secured a meeting in a familiar locale. The 49ers are hosting Key on a visit Tuesday, Ian Rapoport of NFL.com tweets. 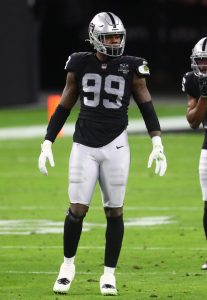 The former Bay Area resident lasted just one season in Las Vegas. The Raiders waived the ex-third-round pick last week, with fellow third-year D-lineman Maurice Hurst receiving the boot as well. The 49ers have lost multiple D-ends this offseason, with the Raiders signing Solomon Thomas and Kerry Hyder defecting to the Seahawks.

The 49ers still have Dee Ford on their roster, but he and Nick Bosa are coming off major injuries. Ford’s status is less certain, creating a need for edge depth alongside Bosa and Arik Armstead. Dion Jordan, a San Francisco contributor last season, is a free agent.

Key played three seasons with the Raiders, who nabbed the LSU product after he unexpectedly fell into Round 3. The Raiders used Key as a 10-game starter as a rookie but relegated him to backup duty over the past two seasons. For his career, Key has just three sacks in 37 games. He did register 11 QB hits in 2020, however, and will only be 25 come Week 1.

One comment on “49ers To Meet With DE Arden Key”