Bengals Director of Player Personnel Duke Tobin says the team is still open to bringing Geno Atkins back in 2021. The defensive tackle remains unsigned, so he could return on a cheaper deal than his original pact. 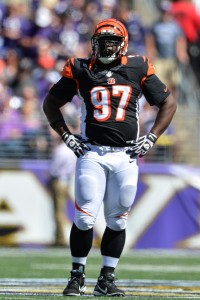 “Geno is one of the greatest players in franchise history and one of the best defensive tackles of the last decade,” Tobin said (via the team website). “He gave us what he had last year…We’ll see if there are things that can be worked out. If it is, great. If not, I think we’ve got other guys that can fill the role.”

Atkins fought through a shoulder injury throughout 2020. Towards the end, it proved to be too much to play with. He suited up for just eight games in total, and, even when he was healthy, he wasn’t happy about his playing time. His final tally: zero sacks and zero starts. It was a sharp drop from his pre-extension season in 2017, when he finished out as Pro Football Focus’ No. 2 ranked interior defender.

The Bengals could have had the perennial Pro Bowler under contract through 2022, but his $14.8MM cap hit for 2021 was too much. Instead, they dropped Atkins and his $12.2MM in non-guaranteed money.

Of course, given Atkins’ lack of playing time last year, he may prefer to add to his 75.5 career sacks in a different uniform.