The Chargers have exercised safety Derwin James‘ fifth-year option, as James Palmer of the NFL Network reports (via Twitter). That decision will guarantee James a $9.052MM salary in 2022. 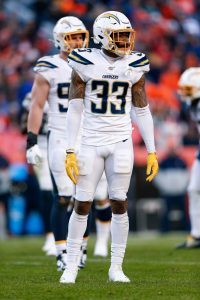 James’ talent should have made this an easy call. The Florida State product was tremendous in his rookie season in 2018, racking up three interceptions, 13 passes defensed, and 3.5 sacks. That year culminated in a trip to the divisional round of the playoffs for Los Angeles and First Team All-Pro honors for James.

But James’ subsequent injury problems might have given the Chargers pause. A stress fracture in his right foot limited James to just five games in 2019, and he suffered a knee injury in practice shortly before the start of the 2020 campaign, which wiped out his entire season. It was reported that the ensuing meniscus surgery would require six to eight months of recovery time, and while we have not heard anything definitive, that timeline and the fact that the team picked up James’ fully-guaranteed option suggest that he is expected to be ready to go come Week 1.

If Los Angeles’ roster can stay relatively healthy in 2021, the club should have a real chance at a postseason berth. The Chargers filled a major need at left tackle in the first round of last night’s draft by picking up Northwestern LT Rashawn Slater, which makes the offense a formidable unit on paper. Meanwhile, a full season from James would be a major boost to the defensive side of the ball.