Giants Trading Down From No. 11 In Play

While history certainly suggests the Giants will not move down from their No. 11 overall draft slot, Ian Rapoport of NFL.com tweets this is a scenario the team is considering. 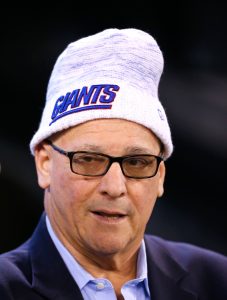 GM Dave Gettleman, famously, has not traded down in any round during eight drafts as a GM — five with the Panthers, three back with the Giants. The Giants have not moved down in Round 1 since 2006, when they traded back with the Steelers and drafted Mathias Kiwanuka at No. 32. But the team has done extensive work on an edge rusher class that may not feature a talent worth selecting at No. 11 overall.

The Giants have also been linked to adding another wide receiver, and a trade-down scenario may depend on whether Alabama stars DeVonta Smith and Jaylen Waddle are on the board at 11. Big Blue, however, already handed out the top wideout contract (by far) this offseason, in signing Kenny Golladay to an $18MM-per-year deal. The Giants have Golladay, Sterling Shepard and Darius Slayton penciled in as their top three receivers.

New York has been in need on the edge for years. The team did not address the position with a notable draft pick last year and has since traded Markus Golden and let 2020 stopgap solution Kyler Fackrell walk in free agency; he signed with the Chargers. The Giants do feature high-end talent on their defensive line, with Leonard Williams signing a monster extension this offseason, but certainly could use help at outside linebacker. Moving down from No. 11 would put the team in better position, value-wise, to draft one in the first round.

The scenario that would obviously strengthen the Giants’ bargaining position at 11: one of this draft’s top quarterback prospects falling to this spot. The Giants have affirmed their faith in 2019 draftee Daniel Jones. Should Mac Jones, Trey Lance or Justin Fields be on the board at 11, the Giants would reside in a strong position to collect quality assets from a quarterback-seeking team — potentially the Patriots or Bears. However, this draft may well be the first to see five QBs selected in the top 10. The Giants may be interested in being the emergency vehicle for a QB-needy team, in the event that does not occur.