Trevor Lawrence was a virtual lock for the No. 1 pick, but Zach Wilson‘s odds of going to the Jets weren’t far behind. With the No. 2 overall pick, the Jets tapped the BYU passer to be their next quarterback of the future. 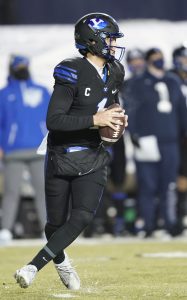 Wilson didn’t earn as much fanfare as Lawrence, but he still offers tons of potential. The 6’2″ passer is fresh off of a breakout season with a 73.5% completion rate, good for No. 2 in the nation. Meanwhile, his 33 passing touchdowns placed him third, and he threw just three interceptions. Wilson’s mobility powered him to ten rushing touchdowns last year, further vaulting him up the Jets’ draft board. It also helped that he hit it off with Jets GM Joe Douglas in the interview process.

The knocks on Wilson are few and far between. Some say his decision making was questionable in 2019, a season cut short by a thumb surgery. But, last year, Wilson kept the turnovers to a minimum and consistently found the open man. Some also wonder if he’ll have durability issues as his ~210-pound frame adjusts to harder hits at the pro level.

Regardless, the Jets are supremely confident in Wilson and his upside, which is why they traded No. 3 overall pick Sam Darnold to the Panthers.