The Jets made one of the biggest moves of the offseason on Monday, trading Sam Darnold to the Panthers. Rather than shying away from the splashy deal, New York GM Joe Douglas gave a press conference on Tuesday to update the media. At that press conference, he made several interesting revelations. You can read most of those revelations in full courtesy of this Twitter thread from Ralph Vacchiano of SNY. 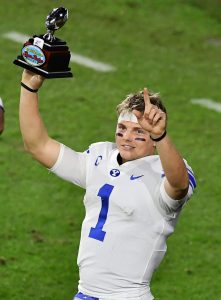 Perhaps most interestingly, Douglas said that the Jets weren’t looking to move on from Darnold at all costs. In fact, he said if they didn’t have the second overall pick, Darnold would’ve been returning for a fourth year in New York. “Having the No. 2 pick, I think it’s safe to say if our pick was a little bit later we wouldn’t be having this discussion right now. We’d be comfortable moving ahead with Sam,” he explained.

When asked if the team was locked in on taking a quarterback at number two, he didn’t try to obfuscate too much. “I think that’s a fair assessment to say,” he replied. Douglas said the team did consider keeping both Darnold and a rookie on the roster, like Josh McCown and others floated recently, but ultimately decided it wouldn’t have been good for the locker room.

Douglas declined to name a specific quarterback the team is after, although they’re now widely expected to take BYU’s Zach Wilson. He also seemed to indicate that Darnold’s impending price tag (the Panthers will pay him $18.9MM in 2022 by picking up his fifth-year option) was a factor.

“We felt ultimately at the end of the day this was an opportunity to hit the reset button financially, so to speak,” Douglas said. Wilson will be pretty cheap for a handful of years on a rookie deal. While he didn’t explicitly confirm that’s where the team is looking, he may as well have. He was asked about Steve Young recently saying the team was committed to taking Wilson. To that, Douglas replied “Steve’s plugged in to BYU pretty well.”

He also said the team is “very excited” about 2020 fourth-round pick James Morgan, who could potentially backup Wilson. It sounds like the Jets could forego a veteran backup and roll with a very young quarterback room in 2021.