The Panthers’ quarterback depth chart is pretty loaded at the moment. But, even after trading for Sam Darnold, Panthers GM Scott Fitterer says he’s open to drafting a passer later this month. 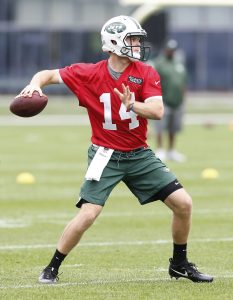 “This doesn’t take out of anything in the draft,” Fitterer said (via the team website). “It doesn’t take us out of taking a quarterback, it doesn’t take us out of taking any position. What we wanted to do going into this draft, through free agency, through this trade with Sam, was to just get rid of all the needs we have. We wanted to get to a place where the roster was in a good spot, and we could take the best available player at number eight. We could always move up, and we could always move back, but this puts us in a position to make the right football decision for this team moving forward.”

Now the backup, Teddy Bridgewater has two years to go on his three-year, $63MM deal. The Panthers have given him the green light to facilitate a trade, so it seems unlikely that he’ll be staying put. Meanwhile, Fitterer has also exercised Darnold’s pricey fifth-year option, tying him to the club through 2022.

Even if the Panthers opt for a QB, they’re unlikely to do it with the No. 8 overall pick. Instead, they’re expected to target a cornerback or an offensive lineman.