Bill Belichick has finally added a first-round quarterback. The Patriots have selected Alabama quarterback Mac Jones with the No. 15 pick. 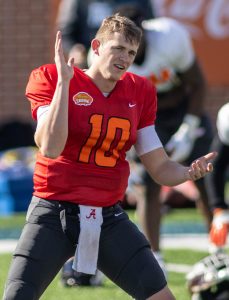 The Patriots naturally struggled to replace Tom Brady in 2020. When the team re-signed Cam Newton earlier this offseason, there was plenty of speculation that the team could still pivot to the draft (or the trade market) to find their future QB. There were even rumblings that New England would climb up the draft board in pursuit of the signal caller. Ultimately, one of the top-five quarterbacks fell into their lap without requiring any moves.

Jones naturally lands in a great spot, but it wouldn’t be surprising if the Alabama product is a bit disappointed about his slide down the board. Jones wasn’t expected to leap Trevor Lawrence or Zach Wilson, but there were whispers that the 49ers were considering Jones all the way back at the No. 3 pick. Ultimately, San Francisco opted for Trey Lance, and Jones also got leaped by Justin Fields, who went to the Bears at No. 11.

Although Jones was the least mobile of this year’s top QB prospects, he piloted another dominant Alabama team to an unbeaten season and a national championship. The 6-foot-2, 217-pound quarterback threw 41 touchdown passes, compared to four interceptions, and averaged 11.2 yards per attempt. He received the same advantages Tagovailoa did, in throwing to multiple first-round receiver talents. Both those wideouts — DeVonta Smith and Jaylen Waddle — said they preferred Jones to Tua.

Barring a time machine from Newton (or a miraculous turnaround from Jarrett Stidham), Jones will presumably be the Patriots starter by the end of the 2021 campaign. New England has loaded up their offense with targets, including tight ends Hunter Henry and Jonnu Smith and wideouts Nelson Agholor and Kendrick Bourne. While the Patriots never really had a reason to select a first-round QB with Brady under center, it will now be fascinating to see how Belichick deals with such a high-profile prospect.