After guiding the Steelers back to the playoffs, Mike Tomlin received another extension. The 15th-year head coach agreed to terms on a three-year deal Tuesday, one that ties him to the team through the 2024 season. This marks Tomlin’s sixth Steelers extension and his first three-year re-up since 2012. 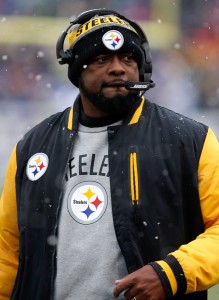 Tomlin’s most recent contract ran through 2021. The Steelers, who famously have only had three head coaches since 1969, will continue their run of stability into the mid-2020s. Tomlin’s new deal comes shortly after the Steelers and longtime GM Kevin Colbert agreed to terms on another extension. Colbert’s new contract runs through 2022.

The Steelers managed an 8-8 record in 2019, doing so despite Antonio Brown‘s messy departure and Ben Roethlisberger‘s early-season elbow injury. They improved upon that mark last year, starting 11-0 and going 12-4. The Steelers led the NFL in sacks for a fourth straight season, powering the team back to the postseason. While the team endured another disappointing playoff exit, Tomlin has continually placed the Steelers in the NFL’s upper echelon. His next challenge may be daunting as well.

Pittsburgh has lost a few starters and has yet to formulate a true post-Big Ben plan, redoing their 18th-year quarterback’s contract ahead of his age-39 season. Roethlisberger struggled down the stretch and committed five turnovers in the wild-card loss to the Browns. The team ranked last in rushing and is retooling its offensive line, with multiple starters — including perennial Pro Bowler Maurkice Pouncey — moving on. Tomlin will also have a new offensive coordinator in 2021. The Steelers replaced Randy Fichtner with Matt Canada.

Tomlin’s new deal will allow him to coach into his 50s, should he choose to do so. He will match Bill Cowher this season, by coaching the Steelers for 15 years. While Tomlin has a ways to go to match Chuck Noll‘s 23-season tenure, he remains on solid ground.