The Texans have yet to engage in trade talks for Deshaun Watson, but the calls are still coming in — even in the midst of Watson’s off-the-field situation. If the Texans move on from Watson or lose him to league discipline, former Washington quarterback Alex Smith could be considered for the role, according to NFL.com’s Tom Pelissero (Twitter link). 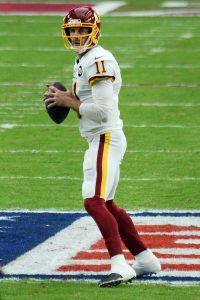 Smith suffered his horrific leg injury against the Texans in 2018, but managed to return to the field in 2020. According to the QB, Washington didn’t necessarily want him back. Smith went on to go 5-1 in his starts and help WFT capture the NFC East title. Smith was, understandably, not at his best. Last yar, he threw for six touchdowns against eight interceptions with a 78.5 QB rating.

Ron Rivera & Co. went on to cut Smith, saving $14.7MM against the cap. Although they didn’t want to give Smith a chance – or a 2021 return — the Texans could be willing to give him an opportunity.

Watson is facing upwards of 20 lawsuits alleging a variety of sexual misconduct. The league office could move to place Watson on the commissioner’s exempt list, which would keep him off the field while the legal situation plays out.