It sounds like Taylor Gabriel is calling it a career. The veteran wideout announced his retirement late last night on Twitter. 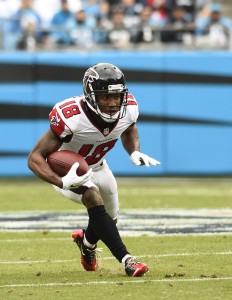 Despite going undrafted out of Abilene Christian in 2014, Gabriel managed to play six NFL seasons, a great accomplishment for an UDFA. The wideout spent the first two seasons of his career with the Browns, including a rookie campaign where he broke onto the scene with 621 receiving yards. He was waived by Cleveland prior to the 2016 season, and he ended up catching with the Falcons.

In Atlanta, Gabriel emerged into a solid third receiver behind Julio Jones and Mohamed Sanu. He had 630 yards from scrimmage and seven touchdowns during his first season with the team, and he added another nine receptions in three playoff games that year (including three catches for 76 yards in the Super Bowl). Gabriel would play another season in Atlanta before joining the Bears on a four-year, $26MM contract prior to the 2018 campaign.

Gabriel started a career-high 11 games during his first year in Chicago, collecting 749 yards from scrimmage. Following a 2019 campaign that saw him limited to only nine games, Gabriel was cut by the Bears last offseason, and he ultimately sat out the 2020 campaign due to COVID concerns.

In total, the 30-year-old will have finished his career having collected 228 receptions for 2,860 yards and 14 touchdowns.