Another early draft pick signing to pass along. The 49ers made a big splash by drafting Trey Lance third overall, so their second pick didn’t get as much attention. 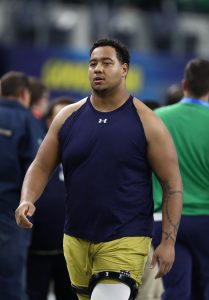 That would be guard Aaron Banks from Notre Dame, who is now officially ready to join the franchise. San Francisco has agreed to terms with Banks on his rookie deal, Field Yates of ESPN.com tweets. The 48th pick in the draft will get a four-year contract worth $7.073MM with a $2.504MM signing bonus per his slot, as Aaron Wilson tweets. Banks was the first member of the 49ers’ class to ink his deal.

Banks is a Bay Area native from Alameda, so this is a cool homecoming for him. He started every game for the Fighting Irish the past two years, and was a first-team All-ACC selection in 2020. Lance Zierlein of NFL.com writes that Banks is a better run blocker than pass blocker.

Zierlein says he “has some physical limitations but should be fine as a potential early starter” on a team with “a physical running game.” That would certainly seem to fit Kyle Shanahan’s run-heavy scheme.