DaeSean Hamilton‘s time in Denver has come to an end. The Broncos are waiving the receiver from Penn State, a source told Mike Garafolo of NFL Network (Twitter link). 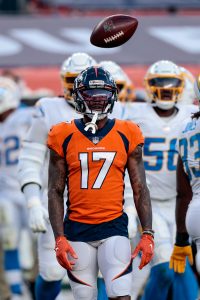 We had heard about a month ago that the Broncos may trade Hamilton around the draft, but obviously nothing materialized. Garafolo writes that they “had trade talks” recently “but couldn’t finalize a deal.” Garafolo also says that Hamilton is a “strong possibility to be claimed” on waivers. Hamilton was a fourth-round pick back in 2018 and was set to enter the final year of his rookie contract.

Penn State’s all-time leading receiver has had between 23-30 catches and 243-297 yards in all three of his pro seasons. He’s flashed some potential at times, but has gotten buried on the depth chart. The Broncos have Courtland Sutton coming back from an ACL tear, and just drafted Jerry Jeudy and KJ Hamler in the first and second rounds last year, making Hamilton expendable.

Denver also has Tim Patrick coming back and just used a sixth-round pick on receiver Seth Williams, so the receiving room was getting pretty crowded. Hamilton turned 26 in March, and will undoubtedly get another shot somewhere.