Bengals quarterback Joe Burrow is on track to suit up for the season opener. The former No. 1 overall pick is “all systems go” for Sept. 12 against the Vikings, per Dr. Neal ElAttrache (Twitter link via ESPN.com’s Adam Schefter). 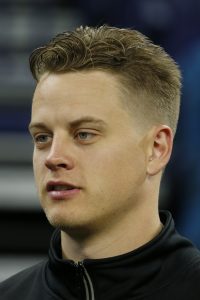 That’s welcome news for the second-year quarterback who is returning from severe knee injuries suffered in late November. The damage, which included ACL and MCL tears, put Burrow in a nine-month rehab program.

The former Heisman Trophy winner finished his injury-shorted season with 2,688 yards, 13 touchdowns, and just five interceptions through nine-plus games. Burrow did it all in spite of his patchwork offensive line — Bengals coaches say they’ll do a better job of protecting him this year.

The Bengals re-signed Brandon Allen this offseason, but the hope is that he’ll be holding the clipboard throughout 2021. Beyond Allen, the Bengals also have Kyle Shurmur, Collin Hill, and Eric Dungey on the offseason roster.

10 comments on “Bengals’ Joe Burrow On Track For Week 1”