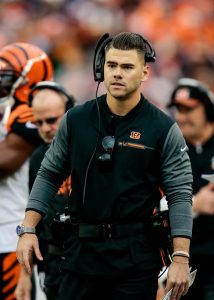 Coombs has a few connections to the Jaguars organization. He’s the son of current Ohio State defensive coordinator Kerry Coombs, who worked alongside current Jaguars head coach Urban Meyer during their time with the Buckeyes. Coombs also worked under current Jaguars offensive coordinator Darrell Bevell when the latter was the Lions interim head coach; Coombs was fired from that position after going rogue on a fake punt, an action that predictably drew the ire of Bevell.

Other than that hiccup with the Lions, Coombs has rocketed up the coaching ranks in recent years. Only 34 years old, Coombs spent more than 10 years with the Bengals before moving to Detroit in 2020.

The Jaguars have an opening at special teams coordinator after Brian Schneider stepped away from the position last week. Former Chargers special teams ace Carlos Polk is currently the Jaguars assistant ST coach, and there’s a good probability that the Jaguars are considering him for the job, as well.