Yet another Texans one-year linebacker deal will commence this offseason. Veteran linebacker Neville Hewitt agreed to terms with the team Friday, Adam Schefter of ESPN.com tweets. 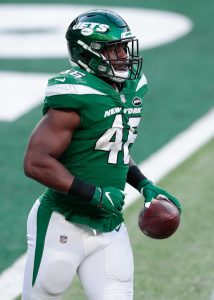 Hewitt arrived in Houston on Thursday for a visit; the meeting produced an accepted offer. The six-year vet spent the first four seasons of his career as a backup, working primarily in a reserve capacity for the Dolphins and Jets. But he operated as a starter for the past two years.

The 28-year-old off-ball ‘backer will join several new arrivals at the position for the Texans. They have agreed to deals with Christian Kirksey, Tae Davis, Kamu Grugier-Hill, Joe Thomas, Hardy Nickerson and ex-Hewitt Jets teammate Kevin Pierre-Louis this offseason. Hewitt, Pierre-Louis and outside linebacker Jordan Jenkins were each part of the 2018 Jets’ linebacking corps.

The Texans will add Hewitt after his best NFL season. The former UDFA finished eighth in the league with 134 tackles; he added six for loss and two sacks. While the Jets went 2-14, Hewitt produced throughout the season and logged a career-high 99% of his team’s defensive snaps.

Although the Texans traded Benardrick McKinney to the Dolphins, they still have starter Zach Cunningham signed long-term. The rest of this lot will vie for the other off-ball linebacker jobs, doing so alongside fifth-round pick Garret Wallow.