On this date in 2018, the Cardinals inked their quarterback of the future. At least, they thought that’s what they were getting when they signed No. 10 overall pick Josh Rosen. 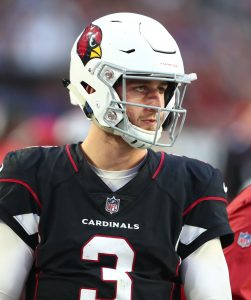 The Cardinals’ quarterback search was an open secret, one that dragged for years. In 2017, they tried and failed to trade up for Patrick Mahomes – they settled for Haason Reddick at No. 13 instead. This time around, they didn’t want to walk out of the 2018 draft with “what-ifs,” so they vaulted up from No. 15 to No. 10 for Rosen, a promising young passer out of UCLA.

Most evaluators viewed Rosen as the most polished and most NFL-ready passer in the entire class. There was a lot to like, especially after the Hebrew Hammer threw for 59 touchdowns over the course of three college seasons. He also saved his best for last. As a junior, Rosen turned in the best TD/INT ratio of his career (26/10) and his best completion rate (62.5%).

Rosen’s talent was apparent – he didn’t have a cannon for an arm, but his technique and footwork were virtually flawless. He was also an all around bright kid, though some evaluators wondered if he was too brainy for his own good. Curiously, his own head coach was among the nay-sayers.

“Because of fit, I would take Sam Darnold if I were the Cleveland Browns,” said Jim Mora. “I think that blue collar, gritty attitude, I think his teammates will love him, I think the city will love him. He’ll say the right things. He will come in and he will represent well. I think he kind of represents what Cleveland is. And if I was one of the New York teams, I would take Josh *snap* just like that. I think they will both be great in the pros.”

Later on, Mora backtracked, but only slightly. Ultimately, the Browns chose the brash confidence of Baker Mayfield over the “gritty attitude” of Sam Darnold. Today, the Browns are pretty happy with their decision.

Rosen went 3-10 as the Cardinals’ starter as a rookie, completing just 55.2% of his throws with 11 touchdowns against 14 interceptions. A deeper look at Rosen’s rookie stats and metrics don’t do him any favors, either. Rosen completed 55% of his throws and averaged just 5.8 yards per attempt. He also finished with a league-worst 26.1 Total QBR and Football Outsiders listed him as the league’s worst full-time quarterback.

Midway through the year, offensive coordinator Mike McCoy got the heave-ho. After the season, head coach Steve Wilks was sent packing. Ditto for Rosen – just one year after the Cardinals selected him, they drafted his replacement in Kyler Murray. Rosen hoped for a fresh start after he was traded to the Dolphins, but he floundered in his three starts.

In 2020, Rosen had a cup of coffee with the Bucs’ practice squad before being claimed by the Niners. Now, after being retained as an ERFA, Rosen is set to battle for his place on SF’s Week 1 roster.