There’s a potential headache brewing for the Cardinals in the desert. Rookie first-round pick Zaven Collins was arrested in Arizona over the weekend, TMZ reports. 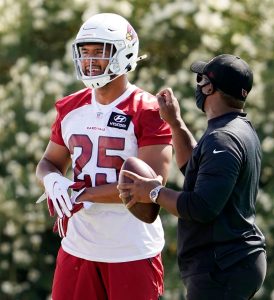 Details are light right now, but cops told TMZ that the linebacker “was speeding and driving dangerously.” He was allegedly driving 76 mph in a 35 mph zone. “A traffic stop was conducted, and Mr. Collins was placed under arrest for the violations,” the police said later in a somewhat cryptic statement.

The Tulsa product just signed his rookie contract, worth more than $14MM, a couple of weeks ago. A unanimous All-American this past season, the Cardinals drafted him 16th overall. The incident doesn’t sound particularly serious initially, but if more damaging details end up coming to light it could result in some league discipline.

Collins had four sacks last year, but we heard recently the team isn’t planning on using him as a hybrid pass-rusher and will instead have him playing strictly inside. Assuming everything goes according to plan, he should play a large role on Vance Joseph’s defense in Year 1.