The Cardinals have signed their top draft pick. ESPN’s Adam Schefter reports (via Twitter) that first-round linebacker Zaven Collins has signed his rookie deal. The deal is worth more than $14MM (per ESPN’s Jeremy Fowler on Twitter). 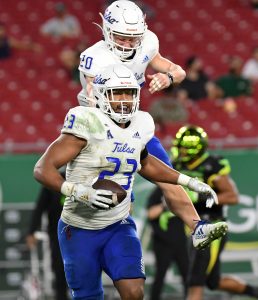 “It’s special,” Collins said (via the team’s website). “You know it’s coming, but until it’s here, you don’t know how you’re going to feel. It’s still a big milestone.”

After finishing with four sacks and 7.5 tackles for loss, the Tulsa product earned a long list of awards in 2020, including an unanimous All-American nod. This performance established him as one of the top prospects at his position in the draft, and the Cardinals made Collins the second linebacker off the board after selecting him with the No. 16 pick.

Despite the first-rounder checking in at 270 pounds, the team isn’t planning to use him as a Chandler Jones complementary pass rusher. The second hybrid linebacker to join the Cards as a first-round pick in the past two years, Collins is ticketed for an inside linebacker role alongside 2020 first-rounder Isaiah Simmons.

With the signing, the Cardinals have now inked the majority of their draft class: