The Cowboys have received calls on Leighton Vander Esch (Twitter link via NFL.com’s Jane Slater). However, the Cowboys are not interested in trading the young linebacker. 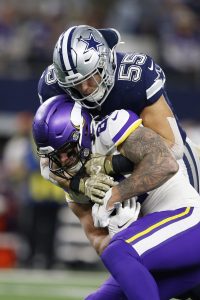 The Cowboys declined to pick up LVE’s fifth-year option earlier this year, so he’s set to be a free agent next spring. Still, the Boise State product and former first-rounder is still in their future plans. If all goes well this year, the Cowboys could even re-up Vander Esch with a long-term extension.

Picking up the option would’ve given LVE a fully guaranteed $9.145MM for 2022. Despite his talent, that’s a steep price for a player who has missed 13 games over the past two seasons. Meanwhile, the Cowboys invested a ’21 first-round pick in fellow ‘backer Micah Parsons, so they’re not exactly sold on Vander Esch and his long-term outlook.

Vander Esch made the Pro Bowl and the second-team All-Pro team as a rookie in 2018 That year, the No. 19 overall pick notched 140 tackles, seven passes defended, and two interceptions. But, last year, he finished with just 60 tackles, one sack, one forced fumble, and zero passes defended in ten contests.

Still, lots of teams can see a bright future for the 25-year-old. That includes the Cowboys, who plan to hold on to him for 2021.