Emmanuel Ogbah kept his distance during the voluntary period, but he’ll be on hand for the Dolphins’ mandatory minicamp. Agent Drew Rosenhaus confirmed his clients plans this week (via Barry Jackson of the Miami Herald), but also noted the edge rusher’s standing desire for a new deal. 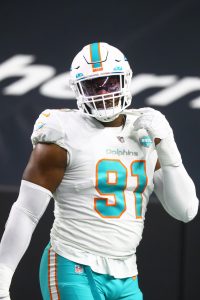 “We would like to get an extension done,” Rosenhaus said. “We’ve approached the Dolphins about that. That’s as much as I can say.”

Ogbah joined the Dolphins on a two-year deal, $15MM deal last year with $7.5MM fully guaranteed. At the time, it was a player-friendly deal — Ogbah lost much of his 2019 season to a torn pectoral muscle. But, based on the strength of his partial season and 5.5 sacks, the Dolphins rolled the dice.

So far, that deal has paid off in a major way. In 2020, the defensive end notched 42 stops, nine sacks, 21 quarterback hits, three forced fumbles, and one fumble recovery. Naturally, Ogbah wants a new contract to reflect his performance, especially after Rosenhaus just scored a three-year, $39MM re-up for linebacker Jerome Baker.

One comment on “Dolphins’ Emmanuel Ogbah To Report To Camp”