The Vikings and Danielle Hunter have agreed to a restructured contract, as NFL.com’s Tom Pelissero tweets. With that, they’ve avoided a potential standoff with the defensive end. 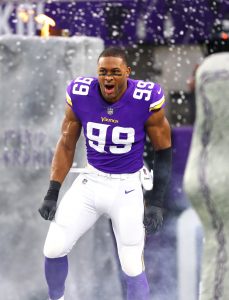 Hunter has been pushing for a new deal, but he told the team he’d still report to minicamp this week. Now, Hunter will get to see more of his money sooner while the Vikings will actually eke out some room for the present year.

The 26-year-old will get $5.6MM of his 2021 base salary in the form of a signing bonus. Meanwhile, in 2022, he’ll collect an $18MM roster bonus if he’s on the team by the fifth day of the league year. If they decide to keep him next March, he’ll be on the books for $20MM with that $18MM portion guaranteed. Or, they can choose to part ways with a modest dead cap hit.

Previously, Hunter was scheduled to make $12.15MM in base pay with another $5.6MM in bonuses for 2022. In effect, Hunter is betting on himself after neck surgery. The Vikings were happy to oblige, because they now have a more reasonable escape hatch if things don’t pan out. Meanwhile, Hunter’s 2023 season appears to be in tact — that year, he’s slated to carry a $14.75MM cap hit with just $2MM locked in.

Hunter missed all of last year with a neck injury and, in the process, underscored his value to the Vikings. Without him, they totaled just 23 sacks. In the previous two years, Hunter personally notched 14.5 sacks.