One of this era’s best kick returners, Cordarrelle Patterson has not made as much of an impact on offense. But teams have used the former Tennessee Volunteers wide receiver prospect in a pass-catching role throughout his career. That looks to change ahead of Patterson’s ninth season. 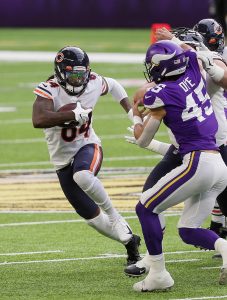 The Falcons plan to use Patterson at running back, with Scott Bair of AtlantaFalcons.com indicating this will be a true position switch. Patterson has logged notable time in backfields in recent years, and Arthur Smith will be keen on using the 6-foot-2, 227-pound weapon in a run-game role.

Patterson signed a one-year, $3MM deal with the Falcons this offseason. Although the team did add recent Panthers backup/Christian McCaffrey injury replacement Mike Davis, it did not add a running back in the draft. Javian Hawkins signed as a UDFA. This points to Patterson being given a true opportunity to work in tandem with Davis, who signed a two-year deal worth $5.5MM. The top three Falcon backs from 2020 — Todd Gurley, Ito Smith, Brian Hill — are no longer on the team.

The Bears gave Patterson a career-high 64 carries last season, doing so after the Patriots gave him 42 in 2018. Former Bears quarterbacks coach Dave Ragone is now onboard as the Falcons’ offensive coordinator. Patterson, 30, averaged 4.1 yards per carry in his two Chicago seasons. Both of those slates ended in first-team All-Pro kick returner selections — the third and fourth of Patterson’s illustrious return career.

While Patterson did not work out as a wideout in Minnesota, he has proven dangerous as a gadget player as a pro. The former first-round pick has 2,087 career receiving yards and 10 aerial TDs. It will be interesting to see how much running back work the Falcons give the elite return man, but a role as a Davis committee partner appears in his future.

8 comments on “Falcons To Play Cordarrelle Patterson At RB”