The Jaguars have agreed to sign wide receiver Pharoh Cooper (Twitter link via NFL.com’s Ian Rapoport). Terms of the deal are not yet known, but it’s likely a low-cost one-year deal given Cooper’s recent track record. 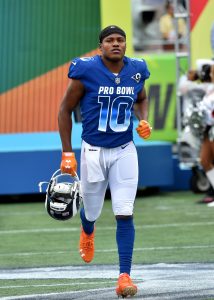 Cooper, 26, put himself on the map in 2017 when he earned a Pro Bowl nod in 2017 as a return man. That year, he handled 66 combined kick and punt returns and led the NFL in yards per kickoff return (27.4). His 2018 encore wasn’t as impressive — he spent much of the year on IR, got waived by the Rams in December, and picked up by the Cardinals. Since then, he’s bounced around a bit, spending time with the Bengals and Panthers.

Cooper is now a few years removed from his best work and he hasn’t done much offensively, save for that ’17 season when he managed 32 catches for 399 yards. But, with the Jags, he’ll have a chance to reassert himself and compete with incumbent punt returner Chris Claybrooks.