The Ravens are hosting running back Todd Gurley on a visit today (Twitter link via NFL.com’s Ian Rapoport). If signed, Gurley could provide yet another intriguing option for Baltimore’s already-loaded backfield. 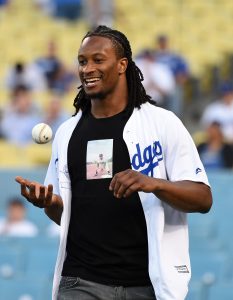 The bulk of the Ravens’ carries will go to second-year pro J.K. Dobbins and Gus Edwards. But, with Mark Ingram now out of the picture, the Ravens are exploring every opportunity to fortify the group. Gurley hasn’t looked like his old Pro Bowl self in a while, but he comes with tremendous upside if he can stay healthy. Or, at minimum, he could mentor Dobbins as he looks to build on his stellar rookie season. Last year, he ran for 805 yards off of just 134 carries, good for a 6.0 yards per carry average.

Gurley, meanwhile, was held to just 3.5 yards per carry with the Falcons last year while adding 25 catches for 164 yards. His best work, of course, came with the Rams — he was an All-Pro in 2017 and 2018 with a combined 40 touchdowns during that stretch.

The Ravens have been active in the third wave of free agency, having just signed former Broncos tackle Ja’Wuan James to a two-year deal. And, despite his ruptured Achilles, there’s a chance that he could suit up for them this season.