Retooling on their offensive line, the Steelers are looking into veteran help. They brought in Pro Bowl guard Trai Turner for a visit Friday, according to ESPN.com’s Adam Schefter (on Twitter). 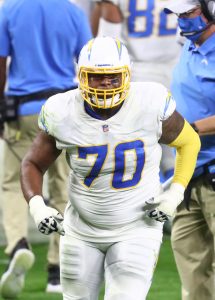 This is the first known visit for Turner, a five-time Pro Bowler whom the Chargers released in March. The Bolts attempted to trade the decorated blocker but could not find a taker. Still, Turner is one of the top free agents available in mid-June.

Turner turned 28 earlier this week and mounted his Pro Bowl streak from 2015-19. Injuries limited the ex-Panther standout to nine games in 2020, but he figures to have a few seasons left in the tank. The former third-round pick has made 89 career starts. That number would jump out on the current Pittsburgh O-line.

All-Pro center Maurkice Pouncey retired, and the Steelers let longtime left tackle Alejandro Villanueva sign with the Ravens in May. Multiyear starter Matt Feiler is now with the Chargers, with whom he is in line to succeed Turner as a guard starter. Interestingly, the Steelers’ most stable O-line spot may be guard. All-Pro David DeCastro is the lone remaining “Killer B’s”-era O-line starter, and the team gave 2020 fourth-round pick Kevin Dotson three starts as a rookie. Pro Football Focus viewed Dotson’s first-year work sample favorably, slotting him as a top-30 guard.

Turner certainly would represent an experience upgrade on the second-year blocker, but injuries have impacted his career in recent years. Turner missed seven games last season and was sidelined for nine over his final three Carolina campaigns. The Panthers, who signed him to a four-year deal worth $45MM, traded him to the Chargers for Russell Okung in 2020. Turner’s next contract will likely be a prove-it deal, potentially setting him up for one more notable payday in 2022.