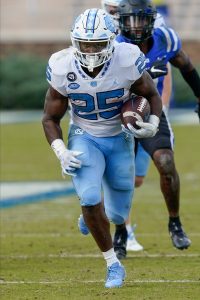 New Broncos GM George Paton traded up in front of the Dolphins at No. 35 to draft Williams, who teamed with Jets fourth-rounder Michael Carter to form one of the nation’s top backfields. Williams entered the draft as Pro Football Focus’ No. 1-rated back; he went off the board third at the position, behind first-rounders Najee Harris and Travis Etienne. Williams doubles as the Broncos’ highest-drafted back since Knowshon Moreno in the 2009 first round.

Williams, who averaged 7.3 yards per carry in his third and final North Carolina season, scored 22 touchdowns in 2020. He amassed 1,445 scrimmage yards despite the COVID-19 pandemic capping the Tar Heels’ season at 11 games. His Denver arrival figures to signal Melvin Gordon will be a two-and-done back with the team — at best.

The Broncos, despite Phillip Lindsay‘s back-to-back 1,000-yard seasons, gave Gordon a two-year deal worth $16MM in March 2020. Gordon played well in spurts but also fumbled four times and was arrested for DUI last year. That charge ultimately being dismissed kept Gordon’s guarantees intact, but his 2021 roster spot may not be locked in. Though Lindsay is now in Houston, the Broncos signed ex-Vikings backup Mike Boone this offseason. It would cost the Broncos $6.5MM in dead money to cut Gordon.