Another first rounder has put pen to paper. Browns first-round cornerback Greg Newsome II has inked his rookie contract, according to ESPN’s Adam Schefter (via Twitter). The No. 26 pick in the draft will get the standard four-year contract worth $12.75MM. 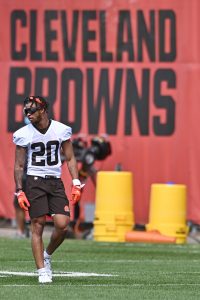 Newsome had a standout career at Northwestern, starting 18 games and guiding the Wildcats to a pair of Big Ten title games. After earning first-team All-Big-Ten honors in 2020, the defensive back declared for the draft. While Newsome was the fourth cornerback off the board, that was still good enough to warrant a first-selection.

The 6-foot-1 cornerback is a strong candidate to start opposite Denzel Ward in Cleveland, although Greedy Williams will give the rookie a run for his money as the veteran looks to return from a season-long shoulder ailment. No matter what role Newsome ends up playing, he’s ready to contribute however he can.

“My goal honestly is just to do whatever I can to help the team win,’’ Newsome said (via Mary Kay Cabot of Cleveland.com). “Obviously, I would love to start at corner. I think any corner in the room would love to be a starting corner. At the end of the day, if I am helping the team win, that is all I can ask for.”

Newsome was the 29th first-round pick to ink their rookie contract, although his delay was inevitabl3 after switching representation earlier this offseason. Following the signing, the only unsigned first-round picks are Jets quarterback Zach Wilson (No. 2), 49ers quarterback Trey Lance (No. 3), and Chargers offensive tackle Rashawn Slater (No. 13).