The Colts announced that they have signed offensive tackle Braden Smith to a contract extension. His deal is a four-year, $70MM add-on worth up to $72.4MM with $42MM guaranteed (Twitter link via NFL.com’s Ian Rapoport). That’s a big step up for Smith, who had one year and $2.43MM to go on his rookie deal. 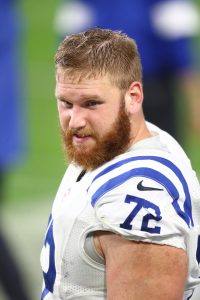 Smith played right guard at Auburn before transitioning to right tackle as a pro. The former No. 37 overall pick has emerged as one of the league’s top young tackles and has helped the Colts form a top-tier offensive line. Pro Football Focus has graded Smith (43 career starts) as a top-20 tackle in each of the past two seasons.

The Colts already have Ryan Kelly tied to high-end center money ($12.4MM on average) and Quenton Nelson could soon become the NFL’s highest-paid guard. Nelson is 3-for-3 in first-team All-Pro appearances and has not missed a game. Fortunately, the Colts have some time to work out Nelson’s deal — he’s inked through 2022, via the fifth-year option. But, because Smith was drafted a round later, he beat his higher-profile line mate to a big-ticket extension.