Jarrad Davis joined the Jets earlier this year on a one-year, $5.5MM deal. But, according to the outside linebacker, that almost didn’t happen. 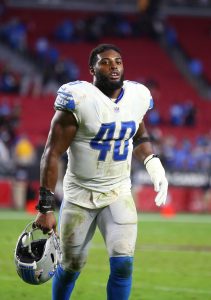 “I contemplated walking away,” Davis said (via Dennis Waszak Jr. of the Associated Press). “I really did, man. But at the end of the day, like, I wouldn’t have felt right doing something else, you know?”

Davis was the No. 21 overall pick in 2017 but didn’t quite live up to his draft status. Then he saw his role — and confidence — reduced under then-Lions head coach Matt Patricia. After starting at least eleven games in each of his first three pro seasons, Patricia started him just four times in 2020. Davis played on less than 30% of the defensive snaps and pondered life without football.

“The battle’s up here,” Davis said, pointing to his head. “And I was losing that battle every single day.”

Now he says he feels rejuvenated under new Jets coach Robert Saleh and his 4-3 defense. Davis fits in well as a 4-3 OLB, giving him a chance to show what made him such a highly-valued prospect just a few short years ago.

To date, he has 45 games to his credit across four years in Detroit. His most productive year came in 2018 when he started all 16 games and finished with 100 tackles, six sacks, and five passes defended.