The Jets are one step closer to officially signing their entire draft class. The team announced this evening that they’ve signed second-round receiver Elijah Moore. 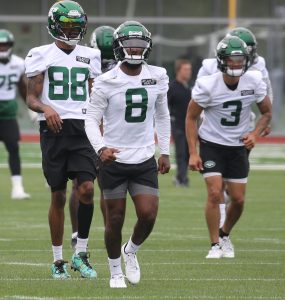 Per ESPN’s Field Yates on Twitter, the four-year deal is fully guaranteed through the first three seasons of the pact. NFL.com’s Ian Rapoport adds (via Twitter) that the deal is worth a total of $8.94MM, and ESPN’s Rich Cimini tweets that the deal includes a $3.86MM signing bonus.

Moore had a standout career at Ole Miss, and he had his best collegiate season during the 2020 campaign. The receiver finished with 1,257 yards from scrimmage and eight touchdowns, earning him first-team All-SEC honors and a consensus All-American nod. Thanks to that performance, the Jets made Moore the second pick of the second round (No. 34 overall).

Despite the presence of free agent addition Corey Davis, 2020 second rounder Denzel Mims, and 2020 receiving leader Jamison Crowder, Moore should have an opportunity to contribute immediately. He’ll initially slot in as the fourth wideout behind that aforementioned trio, although the likes of Keelan Cole or Vyncint Smith could push for snaps with strong preseasons.

With this signing, the Jets only have one unsigned draft pick: second-overall pick Zach Wilson.