Zach Wilson is one of two unsigned first-round picks, and we’re now learning why the Jets franchise quarterback has yet to ink his rookie contract. According to Mike Florio of ProFootballTalk.com, the No. 2 pick and the organization are in a staring contest over “cash flow and offset language.” 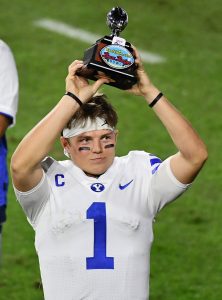 In fact, the Jets organization paid 2018 No. 3 pick Sam Darnold his entire signing bonus 15 days after his signing (Twitter link). Of course, as Florio notes, Joe Douglas can simply argue that it was Mike Maccagnan‘s regime that agreed to that arrangement.

Surely, one of the sides will blink. Presumably, it will be the Jets, who wouldn’t want to do anything to upset their franchise cornerstone before he’s even stepped on the field. Further, Wilson wouldn’t be in training camp without a deal, meaning the organization will be forced to move forward with James Morgan and Mike White as their top options. Assuming the organization wants to take a step forward in 2021, that scenario presumably wouldn’t sit right with anyone.