Free agent cornerback Richard Sherman was arrested by Seattle police on Tuesday night on charges of “burglary domestic violence” (Twitter link via NFL.com’s Ian Rapoport). Sherman was denied bail as the incident is being investigated as a felony. 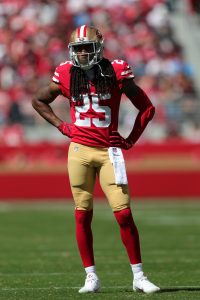 Beyond the public record of the arrest, the details are somewhat murky. In a legal context, this may or may not be a typical “burglary” — in DV cases, that could amount to breaking and entering a residence without permission.

Sherman, 33, was limited to just five games in 2020, but he was a second-team All-Pro not too long ago in 2019. Between his asking price, age, and decline in performance, he has yet to find his next NFL home. Last month, we heard that a return to the 49ers — or even the Seahawks — remained possible. However, his Tuesday night arrest will put any football plans on hold.

In 2019, his last full season, Sherman tallied 61 tackles and three interceptions en route to yet another Pro Bowl nod. For his career, Sherman has notched 36 interceptions and 115 passes defensed across ten seasons.