The Steelers lost one middle linebacker today, but the team got good news on another. According to Gerry Dulac of the Pittsburgh Post-Gazette (via Twitter), linebacker Devin Bush is recovering nicely from his torn ACL and is expected “to be cleared to fully practice right away.” 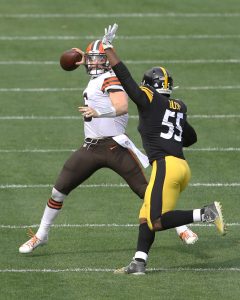 The former first-round pick tore his ACL in October, limiting him to only five games last season. He had appeared in every Steelers defensive snap up to that point of the season, collecting 26 tackles and one sack. That performance followed a rookie campaign where Bush collected 109 tackles, one sack, two interceptions, and four fumble recoveries, leading to him earning PFWA All-Rookie Team honors.

Bush made a cameo at OTAs, and the hope was that he’d be fully healthy by Week 1. It sounds like he’ll be fully healthy much earlier than that, allowing the 23-year-old to truly prepare for the upcoming campaign. Bush will regain his starting gig in 2021, and he’ll presumably start alongside Robert Spillane.

The Steelers learned earlier today that veteran linebacker Vince Williams was calling it a career. The 31-year-old was expected to play a significant role behind both Bush and Spillane.