The Lions made Breshad Perriman and Tyrell Williams the veteran components of their post-Kenny Golladay/Marvin Jones receiving corps. But only Williams appears certain to be part of Detroit’s 2021 squad. 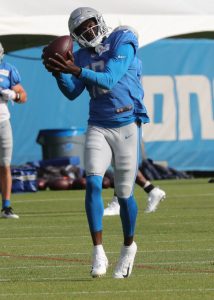 Perriman has moved onto the Lions’ roster bubble, Justin Rogers of the Detroit News notes. The former first-round pick has dealt with a hip injury during camp, but even when available, the journeyman wide receiver has not impressed.

“There just hasn’t been enough out there,” Dan Campbell said of Perriman’s injury-limited camp, via Rogers. “He had the hip injury and then he comes back, he was solid the other night for the plays that he had, but yet he had an OPI, which he knows better than. … I think he’ll be better coming off of this hip. But I think that room right now is still up for grabs. I think there is a heavy competition going on in that room right now.”

The rebuilding team has one of the NFL’s thinnest receiving crews, so it would be surprising if Perriman did not survive the final cuts. The Lions guaranteed the veteran deep threat $2MM as part of his one-year, $2.25MM agreement. The 28-year-old pass catcher also has played for new Lions receivers coach Antwaan Randle El previously (with the Buccaneers in 2019).

Perriman has played for four teams in the past four years, moving from Baltimore to Cleveland to Tampa to New York. With the Jets in 2020, the 6-foot-2 wideout caught 30 passes for 505 yards and three touchdowns.

Williams and fourth-round rookie Amon-Ra St. Brown appear to be the only locks to make the team, per Rogers, with the latter on track to be the Lions’ primary slot receiver. Second-year wideout Quintez Cephus and veteran Kalif Raymond are vying to start opposite Perriman, which was designed to be Perriman’s role. The Lions also have ex-Packer Geronimo Allison and former UDFA Victor Bolden on their roster, and Campbell said ex-UDFA Tom Kennedy has made a push to make the team after a strong preseason thus far.