The Vikings and Harrison Smith have agreed to a four-year, $64MM extension (Twitter link via Mike Golic Jr. of ESPN Radio). With that, the All-Pro now stands as the second highest-paid safety in the league. 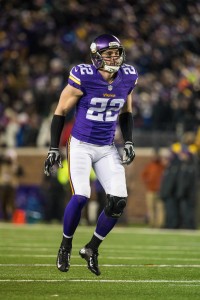 Smith, 32, was previously set to enter the final season of his five-year, $51.25MM deal. It was a whopper of a deal at the time, but that AAV had him outside of the top ten among safeties in 2021. Smith, who has spent the last nine years in Minnesota, wondered whether he was headed for divorce with the only NFL team he’s ever known.

“I mean I don’t know what happens at the end of careers,” Smith said recently. “Sometimes things change. I don’t plan on that happening, but the NFL is the NFL. It’s always wild. But I’ll always consider myself a Viking no matter what.”

Now, after watching Anthony Harris‘ offseason departure, Smith has a brand new deal and a significant pay bump to boot. Still a high-end safety, Pro Football Focus has rated him in the top-15 for each of the last four years. That includes 2015 when he graded No. 1 at safety.

This’ll be Year 10, but there’s no reason to believe that Smith is slowing down. Last year, Smith matched his career high with five interceptions. Now, with a new deal, he’ll look to set even more watermarks in Minnesota.