Despite only seeing three snaps through the first two weeks of the season, Jets wideout Denzel Mims apparently remains in the team’s plans. According to NFL Network’s Mike Garafolo (via Twitter), the Jets have continued to turn away trade suitors. 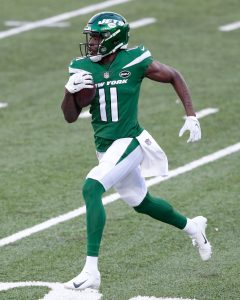 We previously heard that teams were keeping an eye on Mims’ status (and growing frustration) in New York, but Garafolo notes that teams keep “calling and calling and calling” the Jets about the receiver’s availability. That included this past week, which followed a Week 2 game where Mims was inactive. Still, Joe Douglas and the front office seemingly believe in the talented offensive weapon, as they’ve rebuffed all inquiries.

The Jets selected Mims in the second round of the 2020 draft, and following a rookie campaign that saw him finish with only 357 receiving yards, there was hope that he’d take a step forward with second-overall pick Zach Wilson under center. Instead, Mims has only seen three snaps (one of which resulted in a 40-yard reception) through two weeks.

According to Garafolo, the team is attributing Mims’ lack of playing time to a crowded depth chart. Since the second-year player is behind Corey Davis, Jamison Crowder, and Elijah Moore on the depth chart, the coaching staff wants Mims to learn each of the receiver roles, something the 23-year-old has apparently yet to master. Crowder is doubtful for tomorrow’s game against the Broncos, so there’s a chance that Mims could find himself getting some reps.