Ha Ha Clinton-Dix has found his next gig. After getting cut by the 49ers earlier this month, the veteran safety has signed with the Raiders practice squad. 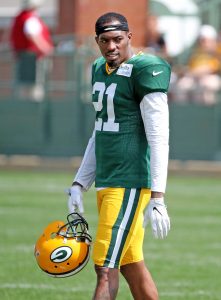 Clinton-Dix found himself without much of a market during the 2020 offseason, but he ultimately got a one-year, $3.75MM deal from the Cowboys. He didn’t even make it to the regular season with his new club, and he remained unsigned for the entire campaign. The veteran had a handful of workouts this offseason before signing with San Francisco, but the 49ers sent him packing at the end of the preseason.

Still only 28, Clinton-Dix has more starting experience than most players on the market. The safety started 16 games as recently as 2019 with the Bears, when he finished with 78 tackles and a pair of interceptions. Clinton-Dix spent most of his career with the Packers, including a 2016 season where he collected 80 tackles and five interceptions en route to a Pro Bowl appearance.

The veteran will now sit on the Raiders practice squad, but he could find himself on the active roster if one of the team’s current options suffer an injury.