TUESDAY: Houston’s starting quarterback will be shut down for a bit. The Texans placed Taylor on IR Tuesday. This marks the third time in the past four seasons Taylor will have lost his starting job in September. Injuries have resulted in the veteran passer being sidelined in each of the past two years, with this hamstring ailment following last season’s scary chest injury involving a pregame injection mishap.

With Watson not in the picture, David Culley also confirmed Tuesday that Mills will start against the Panthers.

MONDAY: Tyrod Taylor‘s hamstring injury could keep him sidelined for the next four games. Mark Berman of Fox26 in Houston reports (via Twitter) that the Texans quarterback “could be out for as long as a month” as he recovers from his hamstring injury. 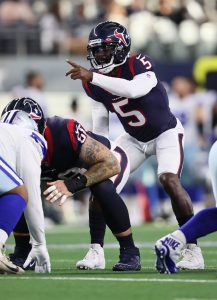 According to Aaron Wilson (on Twitter), Taylor was diagnosed with a grade two hamstring injury, leading to the one-month timeline. NFL Network’s Tom Pelissero seems to insinuate (on Twitter) that Taylor is waiting for swelling to go down before committing to a definitive timeline, with the reporter adding that “an IR stint could be in play.” If Taylor is indeed sidelined for a month, the Texans would surely place the QB on short-term IR to open an extra roster spot. If the Texans don’t place him on IR, that would mean the team thinks Taylor can get on the field in a couple of weeks. NFL Network’s Ian Rapoport tweets that the QB is currently considered “week-to-week.”

After spending the past two seasons with the Chargers, Taylor inked a one-year contract with the Texans this past offseason. Following a Week 1 victory where the QB tossed two touchdowns, Taylor completed 10 of his 11 passes for 125 yards and one touchdown before leaving the game on Sunday.

Davis Mills took over during that eventual loss to the Browns, and the rookie will be under center going forward. According to Wilson, Jeff Driskel is expected to be elevated from practice squad to serve as the primary backup. We learned earlier today that Deshaun Watson wouldn’t be seeing the field despite Taylor’s injury.

11 comments on “Texans’ Tyrod Taylor Could Miss One Month”