We’re starting to get some clarity on Russell Wilson‘s return to the field. According to NFL Network’s Mike Garafolo (via Twitter), the quarterback has a shot to immediately return from IR when eligible in Week 10. 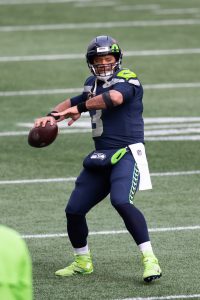 Per Garafolo, Wilson will take a major step in his recovery when he has a pin removed from his fractured middle finger, and it sounds like that will end up happening within the next week. After that, Wilson and the Seahawks will just be waiting for the bones to fully heal, at which case the QB will presumably be cleared to play.

Wilson suffered a ruptured middle finger tendon in his throwing hand earlier this month, requiring surgery and his placement on injured reserve. It was uncertain how long it’d take Wilson to recover, but Week 10 was always the earliest the franchise QB could be activated. Seattle has a Week 9 bye, which will provide the team some extra time to make a final decision on Wilson’s status.

Wilson’s stint on the IR forced him to miss the first regular season action of his career. Geno Smith will continue under center for Seattle while Wilson is sidelined.