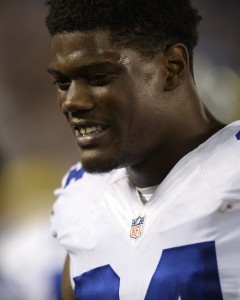 We already knew that Gregory’s calf injury was going to sideline him for at least one game, but it sounded like the team was considering keeping him off IR. Ultimately, that won’t be the case, and Gregory will now be sidelined for the next three games. Gregory suffered the injury during a one-on-one drill on Wednesday, and a subsequent MRI revealed the strain.

Gregory has largely done well to stay on the field this season, which comes after the former second-round pick spent much of his career away from the Cowboys due to suspensions. In seven games, Gregory has recorded five sacks and 12 quarterback hits. The seventh-year D-lineman has added a team-high two forced fumbles during what has been a breakthrough season.

When Gregory was sidelined earlier this season, the team moved first-rounder Micah Parsons to defensive end, so the team could go back to that configuration for the next few weeks. Despite playing mostly in an off-ball role, Parsons has matched Gregory’s five sacks. No other Cowboy edge rusher has more than one sack, however.