When Cam Newton rejoined the Panthers this week, we learned that he could collect up to $10MM on his one-year contract. Well, it sounds like Newton will be hard pressed to reach those incentives, with the majority of his bonuses tied to the team’s performance in the postseason. 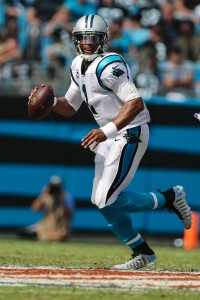 ESPN’s Field Yates has provided (via Twitter) the full details on the QB’s contract with the Panthers. Newton can earn an extra $500K for each playoff win (coupled with playing at least 50 percent of the team’s offensive snaps). Newton can also earn an additional $1.5MM for a Super Bowl win (+ 50% playing time) and another $1MM if he wins Super Bowl MVP.

No disrespect to the Panthers, but there’s no guarantee that they even make the playoffs, much less get a playoff win. Per DraftKings Sportsbook, there are 11 NFC teams with better odds to make the Super Bowl, and there are 23 NFL teams with a better chance of winning the championship. Even if you ignore the Panthers’ odds, there’s still a chance the team goes back to Sam Darnold once he returns from the IR.

In reality, Newton will likely earn the previously reported $4.5MM that is guaranteed plus his per-game roster bonus. In other words, assuming Newton is rostered for the rest of the season and the Panthers either fail to make the playoffs or fail to win a postseason game, then Newton’s really looking at a max contract value of $6MM.