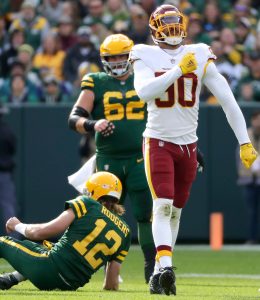 Sweat suffered a fractured jaw two weeks ago, and while he was fortunate to avoid surgery, a trip to the IR still seemed pretty likely. The 25-year-old was told by doctors to have “no physical contact for a month,” so it sounded like there was no shot he’d return before December. Now, the earliest he can see the field is December 5th against the Raiders.

The 2019 first-round pick has been a force since entering the NFL. After collecting 16 sacks through his first two seasons, Sweat compiled another four sacks in eight starts this year. The defensive end also has 19 tackles, two forced fumbles, 12 QB hits, and three tackles for loss.

WFT let Ryan Kerrigan walk this offseason, so the organization has some inexperienced options to replace Sweat. The team will likely turn to James Smith-Williams when they return from their bye tomorrow, although they’re also rostering Casey Toohill and rookie Shaka Toney.