Cam Newton will return to the Panthers. A Thursday meeting produced a quick contract agreement, one that will lead the former MVP back to Carolina.

The sides agreed on a one-year deal, USA Today’s Josina Anderson tweets, and Newton will do quite well for himself. The Panthers are giving him $4.5MM fully guaranteed, Ian Rapoport of NFL.com tweets, and the veteran passer has a chance to collect up to $10MM. Offset language was present covering $1.5MM in Newton’s most recent Patriots deal, Tom Pelissero of NFL.com tweets. This led Newton to hold out for more this season, and he landed such a contract from his initial NFL employer.

The Panthers have cycled through multiple starting quarterbacks since cutting Newton in March 2020. They are now down Sam Darnold, who had regressed after a strong start. With Darnold on IR, P.J. Walker is in line to start against the Cardinals in Week 10. By Week 11, the Panthers’ first-string plans are likely to change. 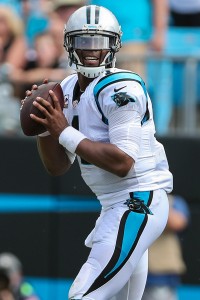 Newton, 32, went through two sets of meetings before committing to rejoin the Panthers. He had previously met with Matt Rhule, who had signed off on his release last offseason, to clear the air, according to Ian Rapoport of NFL.com (on Twitter). A meeting with owner David Tepper, first-year GM Scott Fitterer and VP of football operations Stephen Drummond then commenced. It all led to a reunion, which ends Newton’s latest lengthy free agency stay.

Set to begin his 11th season, Newton is coming off a 15-start slate with the Patriots. That campaign did not go especially well, with Newton throwing just eight touchdown passes. Although the Pats re-signed Newton this offseason, they drafted Mac Jones and decided not to keep both QBs going into the season. This agreement also means the Patriots will add $1.5MM in cap space in 2022 (h/t Patscap, on Twitter). Since the late-August release, Newton spoke with the Seahawks about a deal amid Russell Wilson‘s injury hiatus. No agreement came to pass. Newton is now vaccinated and can rejoin the Panthers immediately.

Rhule will be the third coach Newton has played for as a pro, and the former No. 1 overall pick will be tasked with quickly digesting Joe Brady‘s offense. Newton made three Pro Bowls in his first five seasons, leading the Panthers to three playoff berths during that span. He led Carolina to a 15-1 season in 2015 and spearheaded the Panthers’ run to their second Super Bowl. A rough Newton outing against the Broncos preceded an injury-plagued second half, one that featured the dual-threat talent ranking 29th in QBR cumulatively from 2016-19. A foot injury cost Newton 14 games in 2019. The Panthers then signed Teddy Bridgewater in March 2020, signaling the end of Newton’s first stint.

Bridgewater is now in Denver, following an April trade, and Darnold is out for at least a month. Walker, who was off to a strong start in the XFL before the pandemic ended its second season early, has made one career NFL start — against the Lions last season — and completed 3 of 15 passes in relief of Darnold in Week 7. Newton has 139 starts under his belt. While Walker stands to make a second start this week, Newton will be positioned to move past 140 for his career soon. The Panthers face Washington, run by ex-Newton HC Ron Rivera, in Week 11.