Calvin Ridley‘s break from football will last at least four weeks. After Ridley was a surprise scratch for the Falcons’ Week 8 game, the team placed its top wide receiver on the reserve/non-football injury list Friday. 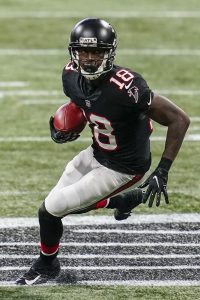 This designation will sideline Ridley for at least three more weeks. The fourth-year pass catcher announced last week he was stepping away from football for the time being to deal with a personal matter. The earliest Ridley can return is Week 12.

The Falcons have already seen Ridley miss two games already for a personal reason this season. While Ridley returned after missing the Falcons’ London game in Week 5, catching four passes for 26 yards and a touchdown against the Dolphins, he was declared inactive for Week 8. During Atlanta’s loss to the Carolina, Ridley made his intention to step away public via Twitter.

This is a pivotal year for the former first-round pick. The Falcons picked up his fully guaranteed fifth-year option but have not yet signed him to an extension. The Falcons traded Julio Jones to the Titans, firmly establishing Ridley as Atlanta’s No. 1 wideout. It is uncertain when the 26-year-old talent will retake his place in the Falcons’ starting lineup, but the team moving him to the NFI list will provide him some time away.