Packers left tackle David Bakhtiari recently underwent arthroscopic knee surgery (Twitter link via NFL.com’s Mike Garafolo and Tom Pelissero). That means Bakhtiari won’t be able to practice or play this week, but the procedure should enable him to return sometime before the season is through. 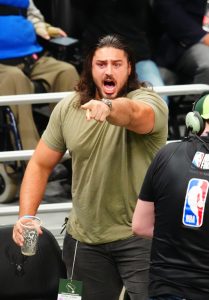 Bakhtiari tore his ACL at the tail end of December 2020, forcing him to undergo reconstructive surgery in January. He was clearly missed in the playoffs, as the Buccaneers’ front seven rushed the Packers’ backfield with ease. Now, in the wake of Elgton Jenkins‘ own ACL tear, the Packers need him more than ever.

The All-Pro left tackle was activated from the PUP list earlier this month, making him eligible for his 2021 debut. He’s still a few weeks away from seeing the field, but the clean-up surgery is expected to put him on the right track.

Before the injury, Bakhtiari had never missed more than four games in one season. One of the game’s best protectors when healthy, Bakhtiari has earned four Pro Bowl selections and and two First-Team All-Pro nods.

For now, the Packers will be leaning heavily on Yosuah Nijman, Dennis Kelly, and other would-be reserves to hold down the fort. They’ll be short-staffed on Sunday when they host the Rams this week, but Bakhtiari may be ready to face the Bears on Dec. 12, after the Packers’ Week 13 bye.