Raiders’ Henry Ruggs To Be Charged With DUI Resulting In Death

Raiders wide receiver Henry Ruggs will be charged in connection with a fatal car crash on Tuesday morning (Twitter link via NFL.com’s Mike Garafolo). Las Vegas police say that Ruggs was impaired when his Corvette crashed into another car and killed the driver of another vehicle. 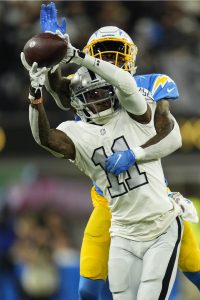 The crash occurred around 4am when authorities say Ruggs’ car collided with a Toyota Rav4. When the fire department arrived, they found the other driver deceased. Ruggs, 22, was transported to the hospital with “non-life-threatening injuries,” per the police report.

Ruggs was booked into Clark County Detention Center on Tuesday afternoon, Ian Rapoport of NFL.com tweets. The victim was a 23-year-old woman, according to Mick Akers of the Las Vegas Review-Journal (on Twitter).

Ruggs, the No. 12 overall pick in the 2020 draft, posted ~1,500 yards and 24 touchdowns over his final two years at Alabama. On the field, the 6’0″ receiver has been a potent deep threat for the Raiders, averaging 18.4 yards per catch as a pro. Now, after today’s tragedy, his career is in limbo.

The wide receiver has two years and change to go on his contract, per the terms of his four-year, $16.67MM deal. The remaining salary and guarantees could be voided, depending on how his case progresses. In any event, he’ll likely spend the rest of the 2021 season away from the team.

The Raiders are now left with just three wide receivers on the roster in Bryan Edwards, Hunter Renfrow, and Zay Jones. Practice squad WRs Javon Wims, D.J. Turner, and Dillon Stoner could be candidates for promotion between now and Sunday’s contest against the Giants.