The Browns and Saints discussed a trade that would have sent Odell Beckham Jr. to New Orleans 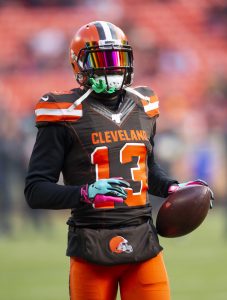 (Twitter link via ESPN.com’s Kimberley A. Martin). Ultimately, the two sides couldn’t get a deal done, largely due to OBJ’s salary.

No offers came in that would have made sense for the Browns, per Dianna Russini of ESPN.com. Although there are no post-2021 guarantees in Beckham’s Giants-constructed contract, the eighth-year wide receiver is due more than $7MM in base salary for the rest of this season. He has also struggled (again) to carve out a steady role in Cleveland’s offense this season.

Beckham hasn’t been totally healthy since 2019, when he notched 74 catches for 1,035 yards and four touchdowns for the Browns. Meanwhile, he’s spent much of his Cleveland tenure at odds with coaches and management. Today, his camp seems to have stoked the flames of a potential trade sending him elsewhere.

Odell Beckham Sr. posted a video on Instagram of his son breaking open on various routes that did not produce targets from Baker Mayfield. The elder Beckham also appeared to endorse a comment that read “[Mayfield is] either hating on Odell or he just doesn’t want him shining,” via ESPN.com’s Jake Trotter. LeBron James weighed in on OBJ’s status as well, dropping a #FreeOBJ into a tweet supporting a player who has never truly fit in the Browns’ offense.

Cleveland acquired Beckham in March 2019, sending Jabrill Peppers and a first-round pick (which ended up being defensive lineman Dexter Lawrence) to New York. Beckham made three Pro Bowls as a Giant and totaled four 1,000-yard seasons in five years with his initial team, but in addition to never fitting in with the Browns, the soon-to-be 29-year-old weapon has been frequently hurt. He played through injuries in 2019 and suffered an ACL tear in 2020 — one that kept him out for the first two games of this season. In six games upon returning, Beckham has only topped the two-reception mark twice. He caught one pass for six yards in the Browns’ Week 8 loss to the Steelers.

The Saints are still waiting for All-Pro Michael Thomas‘ return from a late-offseason surgery, though they have since seen fourth-year contributor Tre’Quan Smith return. No Saints pass catcher has topped 300 yards this season, with Marquez Callaway leading the way with 284 yards — a chunk of those coming on a Hail Mary reception in Washington. The Saints cleared more than $100MM in cap space earlier this year, so adding Beckham’s base salary likely would not have been a deal-breaker for a team perpetually up against the salary ceiling. But the sides could not agree on terms, ensuring OBJ will finish a third season in Cleveland.