Jaguars head coach Urban Meyer has no interest in returning to the college ranks, according to a source who spoke with Michael DiRocco of ESPN.com (Twitter link). Despite the new vacancies at Oklahoma and Notre Dame, DiRocco hears that Meyer remains committed to Jacksonville. 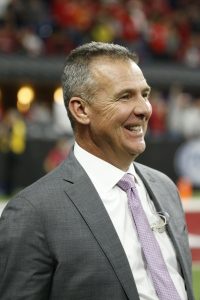 Meyer’s first foray into the NFL hasn’t been easy so far. And, just as his Jaguars dropped to 2-9 on the year, multiple high-profile jobs opened up. The University of Oklahoma needs a new head coach to replace Lincoln Riley, who jumped ship for USC. Ditto for Notre Dame, now that Brian Kelly is the new HC at LSU.

“Zero chance at that happening,” Meyer said in March when asked about a return to the NCAA. “What coach [Nick] Saban went through, I don’t know. That’s Coach Saban’s business. I’m not quite sure. At some point, I might talk to him about it…he’s a friend of mine and I got great respect for him.

“It is different. It’s completely different. My mind is set. There’s gonna be some losses. That’s gonna be miserable. I hate losing. We all do. But the reality is that you’re gonna lose. Hopefully you win more than you lose. But that’s something that’s gonna be new to me. I have to get my mind right and I’m working on that.”

Meyer will aim for his next win on Sunday when his Jaguars face the Rams.