The 9-2 Cardinals are legitimate Super Bowl contenders, and a great deal of their success this season can be attributed to players ticketed for free agency in 2022. That includes running backs Chase Edmonds and James Conner, wide receivers A.J. Green and Christian Kirk, tight end Zach Ertz, outside linebacker Chandler Jones, and quarterback Colt McCoy. 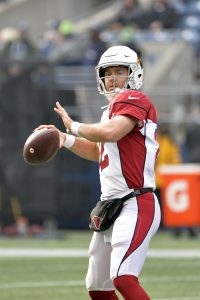 Although the club is obviously focused on making a championship run right now, GM Steve Keim will be tasked with making sure Arizona’s window of contention doesn’t close after one year. However, it does not sound as though there will be any extensions between now and the end of the season.

In speaking about the difficulty of striking an in-season extension, Keim, during a recent appearance on 98.7 KMVP, said that such a move is possible, “[i]f we identify the guys we see as core players, and there are a lot of them with the success we’ve had, but it really is tough. A lot of times, guys want to test the market or it’s just not the appropriate time because they are so focused on football” (via Darren Urban of the Cardinals’ official website).

Keim added, “[t]here are so many moving parts to it, but there are a lot of guys we want to re-sign and make sure they remain Cardinals.”

One such player is McCoy, who has performed well this year in relief of the injured Kyler Murray. The Cards have gone 2-1 in McCoy’s three starts, thereby managing to stay atop the NFC standings, and the 31-year-old has completed over 75% of his passes for three TDs and one pick. Keim said that it is “highly important” to keep McCoy in the fold.

Meanwhile, head coach Kliff Kingsbury attracted the attention of the University of Oklahoma, and while the blue-blood collegiate program has now gone in a different direction, Keim knows what he has in Kingsbury.

Urban says that, just as the Cardinals do not anticipate new deals for their top FAs before the end of the 2021 campaign, they are not presently working on an extension for Kingsbury. However, Jason La Canfora of CBS Sports hears that a Kingsbury extension is a major offseason priority, and that the 42-year-old may end up with a salary near the top of the head coaching pay scale.